Research Workshop “The Potential for Research on Noh Materials”

As “a core of excellence for the international and interdisciplinary study of noh”, the Noh Theatre Research Institute hosts joint research topics. The workshop “The Potential for Research on Noh Materials” (Oct. 21) formed part of a project on philological and linguistic approaches.

“The publication of noh libretti in the history of early Edo-period printing: the text on the back of the cover of the moveable-type edition of the Tamaya libretto” (OCHIAI Hiroshi, Professor, National Institute of Japanese Literature)

Miyamoto’s paper gave a survey of research into the yuishogaki or pedigrees of noh actors who served around thirty regional lords throughout Japan, discussing the diffusion of noh to the provinces, noh hierarchy, and the social status of noh actors. This research was published in Nohgaku shiryō sōsho, vol. 5.
Ochiai belongs to a research group on noh libretti with members from Nara Women’s University, Chukyo University, Keio University, and the National Institute of Japanese Literature. In 2016, the group organized a conference on Kōetsu libretti and an exhibition on the same libretti co-sponsored with the Keio Institute of Oriental Classics. He explained the text on the back of the cover of the moveable-type edition of the Tamaya libretto and discussed the early Edo-period printing business and the role of booksellers and craftsmen specializing in book covers.
Takahashi leads the sponsored joint research project “Compilation of a Database of Terms related to Buddhism in Noh Plays and Research into the Buddhist Background of Noh” which involves researchers specializing in Buddhism and medieval Shintō. Discoveries were made during the process of compiling examples of Buddhist gāthā (stanzas), quotations from sutras, and Buddhist terms cited in plays. He focused on two stages in the history of Buddhist terms: the period before and after the terms were incorporated into noh plays, examining how gāthā developed within Japan. Several sources had not be previously identified.
Toyoshima leads a research group on the philogical study of noh transmission books involving linguists from Kanazawa University, Japan Women’s University, Kyoto Prefectural University, Shinshu University, and Ochanomizu Women’s University. His paper dealt with how noh treatises confused goin (“Five Sounds”) in the sense of the phonetic syllabary with goon in Zeami’s sense of five types of play. He examined the question of whether transmission books were written down in phonetically or according to normative rules.

The meeting was attended by sixty-four participants. 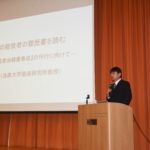 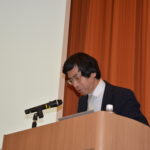 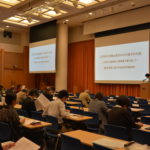 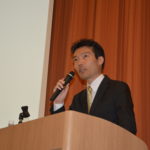 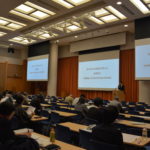 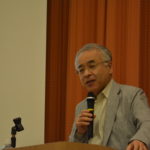 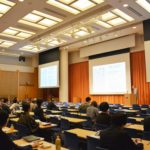