This theme was the focus of a symposium at Hosei University (Nov. 24) involving researchers and performers from different fields and countries. The “core of excellence for the international and interdisciplinary study of noh” ended its first period in 2018 with collaborative work combining traditional forms of noh research with computer analysis of noh singing, computer graphics to reconstruct noh space, and the application of robot design. This symposium aimed to build on the foundations of noh research by seeking points of contact with medicine and philosophy.

After explaining the symposium’s aims, YAMANAKA Reiko presented a paper: “Sensation of dreaming, memories of place: the structure and fascination of phantom noh.” In Zeami’s structure of mugen nō, a spirit appears from the other world and recounts a tale of the past to someone who awakes as if from a dream at dawn. Theexample of the play Izutsu illustrated how memories are laid over recollections of a certain place.

INABA Toshirō, Assistant Professor of Cardiovascular Medicine at the University of Tokyo Hospital, gave a lecture on “Common ground between Noh and medicine: the interval between consciousness and unconsciousness.” He began by tracing the development of the human body from a single cell. The complexity of the brain means that matters that cannot be handled by the conscious mind are left to the unconscious, like the pineal gland which controls sleep cycles. Sleep acts as a bridge over the interval between consciousness and unconsciousness. Noh makes subtle use of the gap between the two, in contrast to kabuki, which stresses consciousness. This gap is found in art, performing arts, dreams, and meditation. Art, performing arts, and medical care share common ground in the way that performing arts depict the memories left by the dead: dreams are a dialogue with dead as well as a requiem for the dead. This is the quintessence of noh, he concluded.

YAMAUCHI Shirō, Professor of the Faculty of Letters, Keio University, gave a lecture entitled “Spirit and Wind and Holy Ghost” about the wind in Miyazawa Kenji’s Matasaburō of the Wind, which begins with a description of sound of the wind. He discussed the relationship between the wind and the soul, and between the wind and human breath, and between things relating to the wind and those linked with life. Whereas the ancient Greeks considered earth, water, fire, and wind as the four basic elements, Zeami also included the “flower.” The world of phantom noh and scholastic philosophy are thus linked by the common properties of the flower and existence.

Yamanaka led a lively discussion by the panelists. Further wide-ranging discussion came from the audience, beginning with YOKOYAMA Tarō (Associate Professor, Atomi Women’s University), who commented on the experience of gaps in dreaming and watching noh, both involving a sensation of no longer clearly knowing who one is. 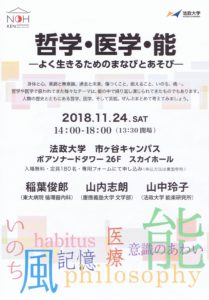 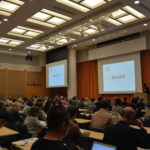 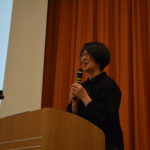 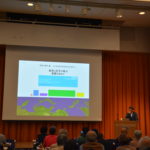 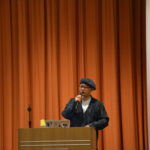 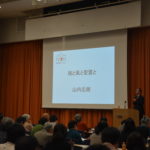 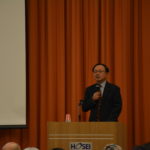 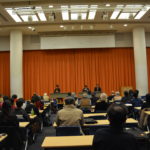