An old drum body in performance: The timbre of the drum ‘J.zu-heta-nashi,’ transmitted by the Yamazaki family

On Friday, February 27, 2015, an event was held at the Sky Hall on the 26th floor of Boissonade Tower, Hosei University Ichigaya Campus, commemorating the donation of the bodies of three kotsuzumi drums and collection of old documents from the Yamazaki family to the Noh Theatre Research Institute.
The Yamazaki were active as kotsuzumi players of the Kō school in Edo-period Kyoto. Takakuwa Izumi outlined the contents of the collection of documents, some of which were displayed in the lobby of the hall, and the old drum body was brought to new life in a performance by Narita Tatsushi, accompanying the actor Ban Shintar. in an excerpt from the Noh play Matsumushi. The drum part was performed according documents from the collection, and the drum ‘J.zu-heta-nashi’ was sounded for the first time in about one hundred years. There were 115 participants. 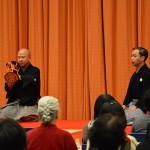 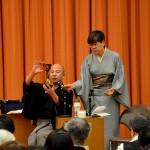